It is with deep sadness that we report the spearing and death of Kasaiyo, the undisputed King of the northern region in Mbirikani Group Ranch. On Tuesday the 12th of January, Kasaiyo met his untimely death when he was killed in the heat of the moment, as herders looking for a lost cow happened upon him in the wee morning hours feasting on their cow. 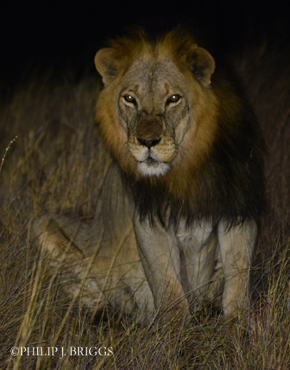 Overall Kasaiyo was a well behaved lion – for the past ten years he has peacefully coexisted on community lands, never going in bomas and only a handful of times in the decade attacking livestock which was left out in the bush overnight. Unfortunately, over the last six months, him and his pride comprised of two adult females, four sub-adults and seven young cubs, have been involved in several livestock killings. The Guardians have been monitoring this group for many years and together with Big Life Foundation, we have managed to keep them safe during this period of high conflict. But things unfolded too quickly in the early hours of Tuesday, and before the Guardians were even told that livestock had been lost, our reigning king, Kasaiyo, was speared.

He was ten years of age and one of the most active and indulgent fathers in our area. Over his life, Kasaiyo sired approximately 20 cubs. He was a strong male with a beautiful black mane who had managed to safeguard his territory for seven years. The Lion Guardians family will miss him dearly.

As we look forward, we are working together, the Guardians, their communities and other stakeholders such as KWS and Big Life, to fully understand the events that took place which led to Kasaiyo’s death so we can immediately address any gaps. We will work hard to continue to protect his female companions, Nosinoni and Nelowua and their seven young cubs as well as Kasaiyo’s teenage offspring to keep his legacy alive for many years to come.