We had a few particularly memorable lion reports in the last few months; Stephanie, our Co-Founder and Director of Science, explains why they were so meaningful to our team. 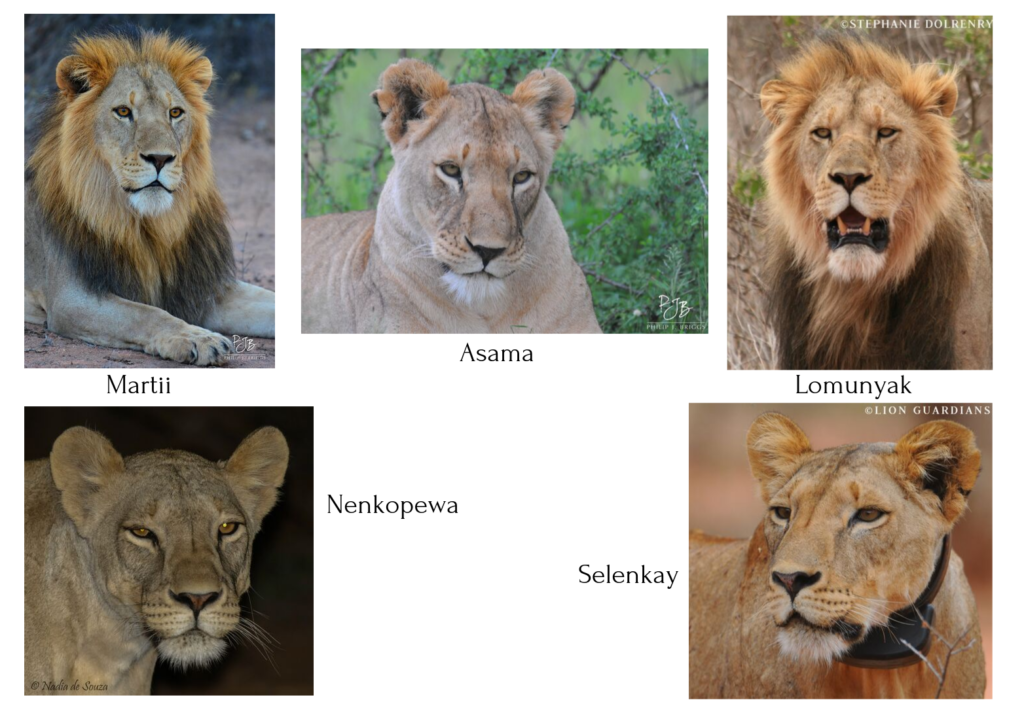 Guardian Lekundu had tracked two males to a thick area and called to say he thought the lions were resting nearby. We drove in and saw the two boys, Nkayioni and Loing’oni, resting peacefully with bulging bellies after gorging on a baby zebra. Although, as our community manager Eric respectfully reminded us, perhaps we shouldn’t be calling them “boys” anymore, since they are now 3-year-old adults! We are all shocked at how fast the time has gone by – it seems that they were cubs only yesterday, but in fact they were born in June 2016.

A bit later in the week, we were delighted to wake up to lion tracks passing next to our camp. Our team followed the paw prints and found Emampai, the sister of Nkayioni and Loing’oni, resting in the shade with her half-sister, the mischievous Napi. Our team looked at Emampai and were awed by her beauty…which is very fitting, since her name means “Pretty Lady”! Incredibly, we can trace her lineage in her looks; she closely resembles her great-aunt Elikan, and her handsome grandfather Lomunyak.

These sightings made our hearts happy for several reasons. First, it’s always nice to see individuals survive to adulthood – it’s a milestone for them and for the communities that have allowed them to grow and thrive on lands booming with people and livestock. Secondly, many members of our team knew these lions’ great-grandparents, and when we look into the faces of this younger generation, we see hope shining back at us. We remember the struggles that the Guardians, the communities, and our monitoring teams have gone through over to keep the generations of lions alive. Many times we nearly gave up hope but instead we held on, and now seeing these youngsters become healthy adults is a gift and a reminder to appreciate the passing of time and your family that came before you – after all, each generation lives on in the next.