This month, our Lion Guardians Office Manager, John Merishi spoke to Mitiaki Solonka about his life’s journey to becoming a Guardian. John says “The soft- spoken Mitiaki narrated how he grew from a young boy who despised wildlife to a senior warrior who is now passionate about conservation.” Read his full story here:

Mitiaki Solonka is one of five Guardians from the wild and thick Loolakir area of northern Olgulului Group Ranch. Mitiaki is a lion name that means one who is in the company of brave warriors and one who will not let his companions down in times of trouble. But he would only receive this title much later in life, in fact Mitiaki’s journey began, much like most other Maasai boys, as a herder.

At the age of 5, he accompanied his mother to look after his father’s calves. Every morning, his mother made sure that she carried a calabash full of milk for the young Mitiaki. His mother mentored him to be a reliable herder. After a whole year of herding the calves, his father noted that he was now up to the bigger task of looking after cattle. Mitiaki was happy for the ‘new opportunity’ meant as it meant he could join his peers in the grazing pastures further afield. This was definitely a step up!

While herding his father’s cows, Mitiaki would often practice his hunting skills. With his three dogs, the young Mitiaki hunted zebras, giraffes, gazelles and later graduated to killing hyenas and cheetahs! The other teenagers would join him in his hunting forays on a daily basis. But despite his penchant for hunting, he never imagined that one day he would kill a lion. However, he was sure of one thing – that when he became a warrior (murran), he would not let his peers down during a hunt. 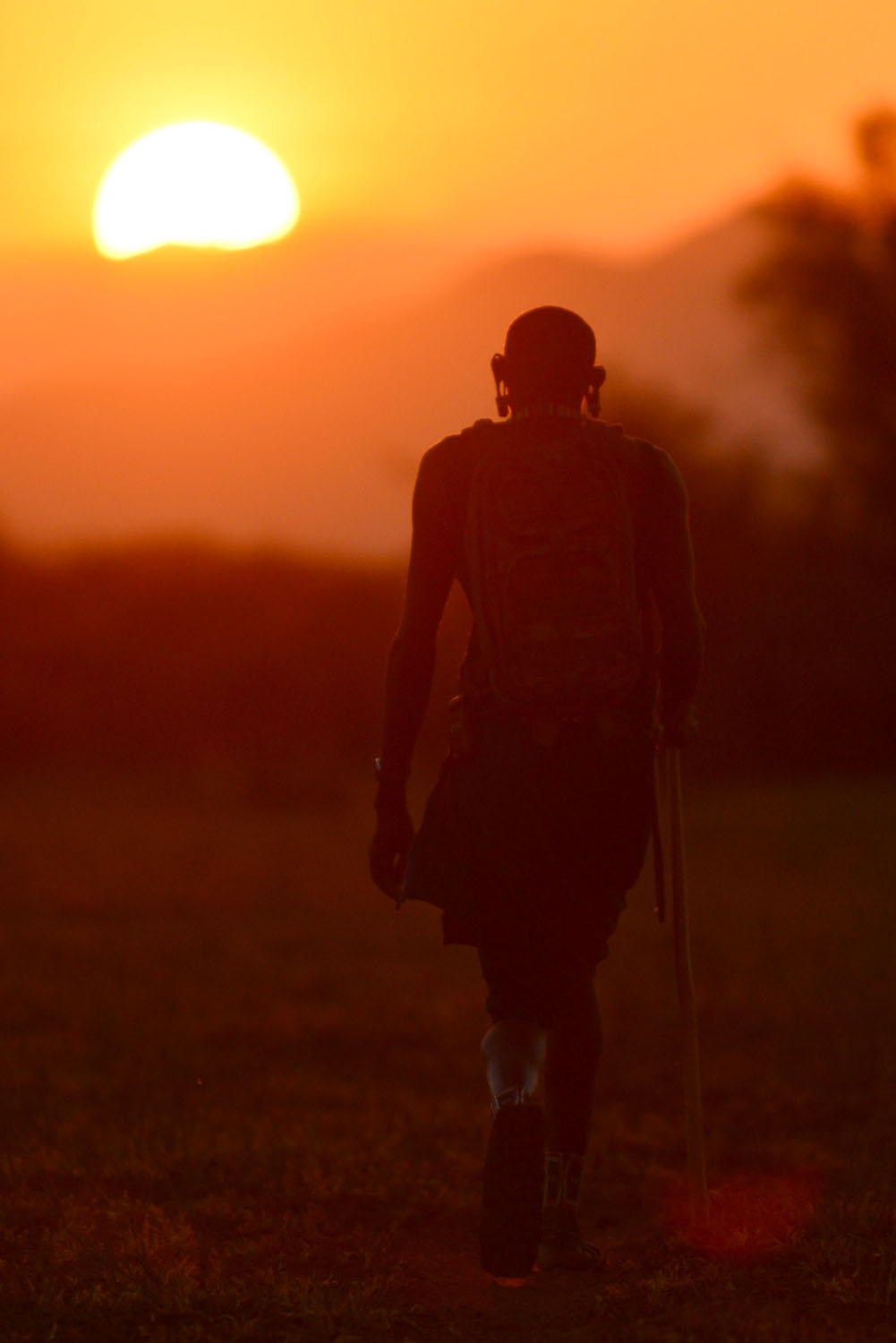 After circumcision in his early teens, Mitiaki became a strong and a reliable warrior. . Occasionally, disagreements arose between the Maasai of Oloitokitok to which Mitiaki and his family belonged and their counterparts and neighbors, the Matapato. These conflicts, popularly known in Maa as ‘Orkiyio’, were the result of boundary-related disputes. Natural resources such as water and pastures fueled conflict between the two communities and many would die as a result. As a tough warrior, Mitiaki was always at the frontline during these conflicts- defending his people with zeal.

Thankfully, to Mitiaki’s delight, , there has been peace between the two warring communities in recent years, courtesy of several peace deals brokered by both political and traditional Maa leaders.

During the time of warring communities, Mitiaki also participated in several lion hunts but was never the one to first spear the lion.. On several occasions, Mitiaki faced the wrath of KWS rangers who frequented the villages to arrest those involved in lion hunts as it is against the law. Mitiaki shared “I became a frequent visitor of a prison in Makindu. We were packed like bags in police vehicles and beaten till we reach our destination.”

He was taken into custody many times and in one of the cases, Mitiaki was even jailed for one month after he was found guilty. Mitiaki said that the bad experiences with the police did not deter him from returning home and joining in the lion hunts once again.

Thus, one day, in the year 2003, after being jailed already several times, Mitiaki and several other warriors were informed that a group of lions had killed a cow nearby. They rushed to the scene and this time, Mitiaki was the first one to spear one of the lions that attempted to fight back against the warriors.. After this successful hunt, his peers named him Mitiaki as he had never let them down during all the previous lion hunts as well as the conflicts with neighboring communities.

When he became a senior warrior, Mitiaki felt that time was running out fast. He had always wanted to be a rich and influential elder in his community and in order to achieve his dream, he decided to venture into business. Mitiaki started a cow trading business. He would buy cows in Tanzania and sell them in Emali, Kenya. The business went on well and he was able to provide for his family. He used the extra profit to buy more cows. The business kept him busy and as a result he reduced the frequency of going on lion hunts. His peers chided him that he was quickly getting older and becoming a ‘coward’.

One day, when he came home from his business trips, a friend informed him that an organization called Lion Guardians was carrying out interviews. He was fascinated with the idea of becoming a conservationist who protects lions while retaining his culture. He decided to join the large number of interviewees and try his luck. As he waited apprehensively for his turn, Mitiaki was worried that as he was unable to read and write he may not make the cut. Hours later he emerged as the top pick. After the three month volunteer period, Lion Guardians happily employed Mitiaki and he underwent the training for Guardians which included a basic literacy module. At the end of this training, Mitiaki said “I can’t believe what a difference five days of training can bring. I have never been to school and thus never held a pen before. But I am now proud that I can write my name, fill data forms and even use a GPS! The Lion Guardians program has hired us, it is now up to us to work hard and live up to the trust placed in us. The ball is now in our court.” Even beyond writing skills, Mitiaki reports that Lion Guardians has cultivated a great passion for conservation in him. From a great herder, to a hunter, a warrior, companion and now a great conservationist relying all the skills of his experiences – we thank you Mitiaki for your service and dedication to the lions!