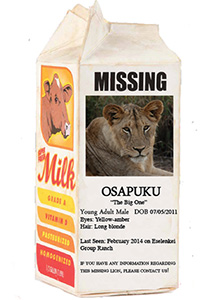 On  October 3rd, 2014 we posted a notice on our Facebook page – Osapuku had been missing for months. He had been last seen in February on Eselenkei Group Ranch. Two months later, thanks to the power of collaboration we know that Osapuku is well and alive!

Michael Mbithi read about LINC on our page and sent us photos of an unknown male who had recently appeared in the Athi-Kapiti plains. Using photographs of his whisker spots taken by our biologists and comparing them to what Michael had sent us, we identified him as Osapuku. We could barely contain the excitement. We had made a LINC!

To our knowledge, this is the first documented case in twenty years of a lion having travelled from the Amboseli ecosystem to the Athi-Kapiti plains. Furthermore, Osapuku’s mother orginated from Amboseli National Park and his father from Tsavo West National Park. Now with Osapuku dispersing to Nairobi National Park, we have evidence of population links between three of Kenya’s premier protected areas.