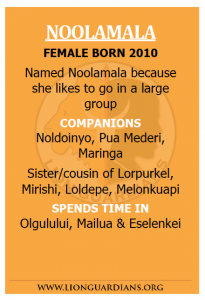 Just after we finished our presentation to the Olgulului Wildlife Club yesterday on World Lion Day, we received a report from Lion Guardian Melompuki that he had seen tracks of a female with two very small cubs. We set-off and arrived there a few minutes before dark. The good thing is that we had with us bait from a giraffe which had been killed by a male lion the previous day. We went as close to the suspected hide-out as possible. We did the call-in* and a few minutes later, Noolamala, a lioness born in March 2010 and the only female from Nooldoinyo’s pride, came. She had moved away from the other pride members to give birth. She was visibly hungry and the hard work of raising cubs was beginning to take its toll on her physical health. After feeding on the giraffe carcass for around 10 minutes, she set-off. We sat patiently not wanting to speculate on what we suspect. After about 15 minutes she came back not alone but with two very little cubs.

We were so thrilled and excited and the Lion Guardians could hardly restrain from giggling. The two very innocent cubs meeting human beings for the first time did not know how to react. They kept running around but made sure to not get too far from their mother who was busy tearing the giraffe meat apart. We had suspected that this female had given birth but we never had confirmation nor did we know how many cubs. The last two times in the recent past that we tried to entice her, she always came on her own. For her to introduce her little cubs to our team on a World Lion Day was a special act. The fact that two more cubs were added to our current cub figures who, with good protection have a very good chance of reaching maturity, makes this day very special for our team because every single lion addition in the Amboseli ecosystem is valuable. 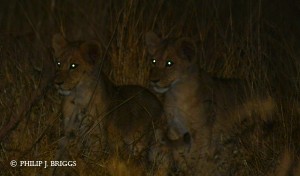 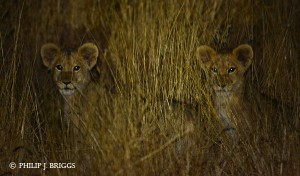 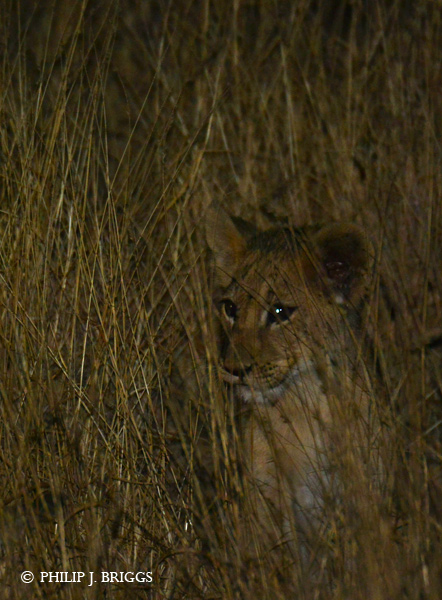 * call-in is when we broadcast with a loudspeaker wildlife sounds such as a buffalo calf in distress, hyenas on a kill and lions roaring.  These sounds usually entice lions, who are naturally curious, to come closer to investigate.  We try to have some sort of bait available so that the lions will stay long enough to be seen well. This gives us the opportunity to get a visual on the lions, and, hopefully, a positive identification as well.