Our monitoring team recently caught up with a lion we had been hoping to get our eyes on for months. In this dispatch from the field, our Director of Science, Stephanie Dolrenry, explains the encounter and the backstory.

Then just as they were both about to give birth for the first time, Sanarua suffered a serious injury to one of her feet; she limped heavily, struggled to walk, and was unable to put any weight on the injured paw. When we last saw her with Nekompewa, she was calling desperately for her sister. But Nekompewa had just given birth and was attempting to find enough food and water to keep herself and her three tiny cubs alive; she couldn’t linger with her injured sister. It was visibly difficult for her to leave Sanarua and heart-wrenching for us to watch; we worried for Sanarua’s survival. We informed the vets of Sanarua’s predicament and they were on call if we could find her. But she disappeared.

It was another three months before we found Sanarua again, and we were overjoyed to see her alive. She was with a different male than we had known her to associate with and they were mating – it was clear that she had unfortunately lost the cubs she had been pregnant with before. Furthermore, she was not with Nekompewa. But thankfully, her foot had healed and only a slight limp remained. Over the next year, she ranged widely in our areas of operation and gave birth to four cubs, but they all died soon after, likely to infanticide. Finally, early the next year, she gave birth to two male cubs and raised them successfully (albeit with more than a few incidents of bad behavior eating livestock).

But she disappeared again in July of last year, although the Guardians reported tracks from her and her now-grown boys. But the tracks revealed that the small family had separated, so we knew that soon Sanarua would be mating again – although we had no idea where.

Then, a month ago, as coronavirus hit Kenya and restrictions were piling up and the global crisis deepening, we received a report from a Guardian of the sounds of lions mating near his boma (livestock corral) and in a grazing area. We responded, and after many hours of circling and bush-bashing, we finally found one young male looking sad and outcast, and another young male about a hundred meters away mating with an older female. We were sure the males were Nekompewa’s cubs from 2016, now on their own and trying to find their place in the world. And as we sat quietly and watched the female, we saw a familiar face looking back at us; it was none other than our friend Sanarua. Although she has not reunited with her sister Nekompewa, she has found company with Nekompewa’s sons, who were the tiny cubs during the time of Sanarua’s injury. 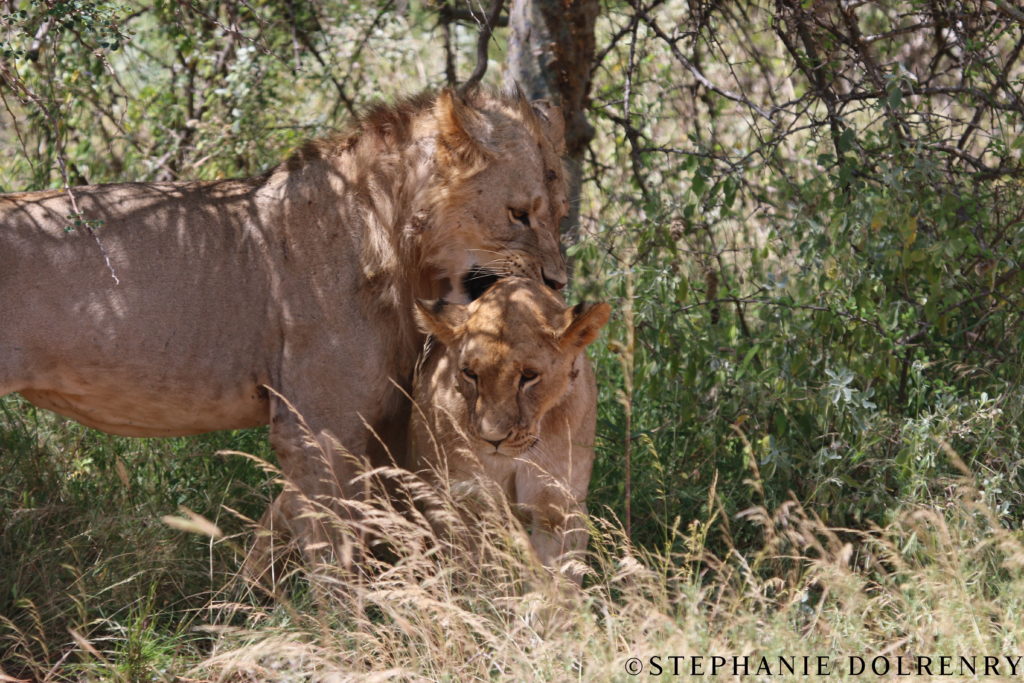 Because they are closely related, we are hoping this “union” is short-term and more experimental than fruitful, and that Sanarua can find the older non-related “pride” males of the area to mate with and have new cubs. We also know Nekompewa is in the vicinity and we are desperately hoping for a reunion….so stay tuned for another update!