Leopards have for a very long time had been considered by many to be an extinct species in Eselenkei Group Ranch. Since the creation of the Selenkay conservancy, many species have made it their refuge. Elephants, which have been absent here for a period of 20 years prior to the creation of the conservancy, are now a permanent feature as are oryxes, elands, lesser kudus and gerenuk. Since our arrival in Selenkay in 2009, we have noted an increase in leopard tracks close to our camp and beyond. The tracks differ in sizes and gender and we suspect that there is a population of at least ten leopards in the conservancy. 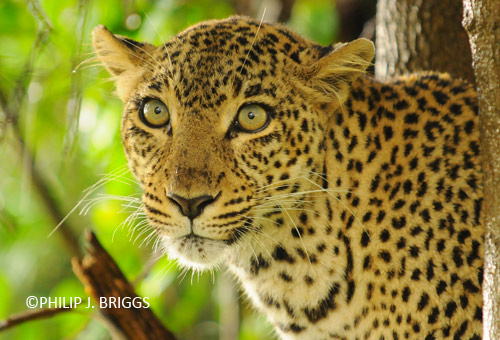 However, as leopards are very difficult to see during the day, we have only seen one scavenging on a giraffe killed by a lion. All other sightings have been through camera traps. Recently, one of our Lion Guardians reported finding a carcass of a baby giraffe killed by a leopard. We were doubtful of the accuracy of the report but when we went to verify, it was very clear from the tracks on the scene that it was indeed a leopard kill. However, our attempts to see the culprit, who we suspect to be a male leopard, were unsuccessful; we pray for the day we will come into contact with him.

Yesterday, as we were heading to our new expansion site in Tanzania, I saw a figure far away in the distance on the road near Amboseli Porini camp, It was very clear to me that this was not a log. As we drove towards the figure, it remained completely composed and seemed to be in no hurry to move. As we moved closer, I immediately knew it was a male leopard. Once he decided that our vehicle was close enough, he slowly got up, stretched his body and majestically strolled towards a nearby thicket while raising his tail to entice a few guinea fowls that were mocking him. 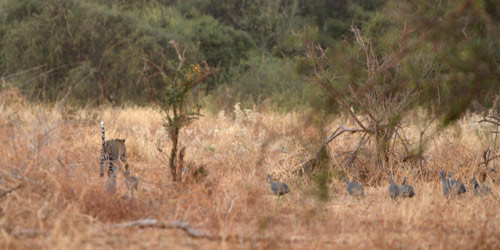 We were lucky to finally see him during the day!  After our exciting morning encounter, we proceeded across the border and held two successful meetings with our partners in Tanzania