She was the strong and silent type. A role-model for community lions because she understood implicitly how to live on these lands – she took care of herself and her cubs, rarely bothering humans and their livestock or bringing attention to herself or her offspring. During her secretive life on this earth, she had four litters of cubs. Today, all the Guardians celebrate her life, gladdened by the length of it and saddened by how it ended. 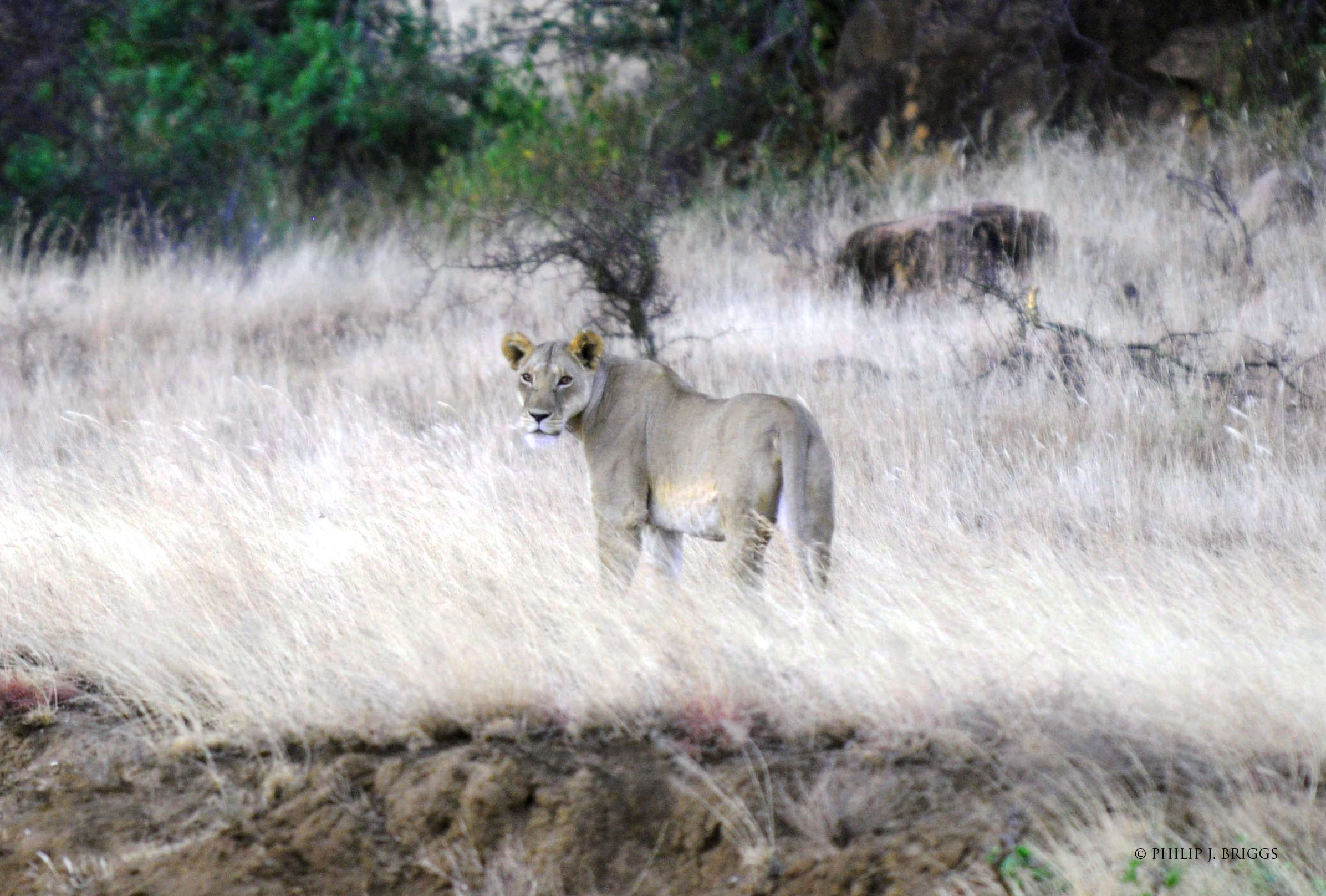 Mbalueni was one of the very first lions to be named and monitored by Lion Guardians. In late 2008, we discovered two young lionesses crossing into Mbirikani Group Ranch from the east. Guardians Mokoi and Olubi named the two sisters Mbalueni and Mbeuti. Over the next twelve months, they wreaked havoc attacking temporary bomas from the eastern border to the grasslands in the heart of Mbirikani. During the days they would hide high on the peaks of the foothills of the Chyulus. In 2010, Mbalueni’s sister, Mbeuti, was speared but her two male cubs survived. We hoped that Mbalueni would adopt her sister’s cubs, but unfortunately she was off in the hills mating and unaware that her sister had been killed and her nephews were in need. The boys moved to the east and were never seen again. But Mbalueni was a skilled survivor and she soldiered on. In the following years, we rarely saw her due to her secretive personality, luckily as she was both collared at the time and also had unmistakably large male-sized prints the Guardians were aware of her movements and managed to keep her safe.

Other than her initial sprees while she was young, Mbalueni was a role-model community lion as she rarely ate livestock. In the past five years she has raised two litters successfully, two males that dispersed and two females, Nenkomum and Koyiaya, who are now coming of breeding age themselves and were nearly always by Mbalueni’s side. A few years ago, with her daughters in tow, Mbalueni moved across the northern boundary of Mbirikani and onto Merueshi Group Ranch and the Chyulu Hills National Park, outside of Lion Guardians coverage area, and we only managed to glimpse her once or twice during these years when she popped back into an area we monitor.
We were very excited earlier this year, when we learned she mated with a very handsome male, Meliyo (a favorite of the Guardians). Several months later, there was even better news! Big Life had captured Mbalueni on a camera trap with four delightful small cubs. This was Mbalueni’s fourth and last litter. The Lion Guardians family is extremely sad to share that Mbalueni and her cubs were poisoned on Merueshi Group Ranch this past week. On the back of the horrible loss of Marsh Pride members in the Mara, the poisoning of Mbalueni and her cubs highlights how humans continue to negatively impact lion populations across their range. We must all work together to change this. As Guardian Kapande, who has guarded Mbalueni and her offspring for many years and was part of the team comprised of KWS and Big Life scouts that found Mbalueni’s carcass on Friday, said “We Maasai have a saying, a milk gourd with holes is almost useless. We must cover the holes or the milk leaks out and goes bad. The areas we protect are like this hole-ridden milk gourd, once the lions leave our areas of protection, they rarely survive. We must do more to save our lions.”
The Guardians mourn the loss of a lioness they watched for many years as she lived side by side with their livestock. We all knew her by her unique tracks and enigmatic personality. She was named for an area where a shrub called Orpalua, preferred by oryx because it stores lots of water, is plentiful. We shall always think of her as we pass through her area and see the plant that stores water – she was a 10-year-old lioness that stored an immense amount of knowledge about coexisting with people.
R.I.P Mbalueni