The Lion Guardians expansion to the Sinya region of Enduimet, West-Kilimanjaro, Tanzania, officially commenced on September 15, 2012, following a series of meetings with the leaders and community members that opened the door to finding suitable candidates for the job in four zones of Sinya. After interviews with more than 30 warriors, we selected 10 to conduct a trial over the space of one week. Each day  volunteers submitted reports from the bush of lion tracks and conflict mitigation incidents, all of which were verified.  We were very impressed with the level of standard shown by all the volunteers; we selected the best candidate from each of the four zones based on his tracking accuracy and strong work ethic.

It is with great pride that we introduce to you the new Sinya LG team: 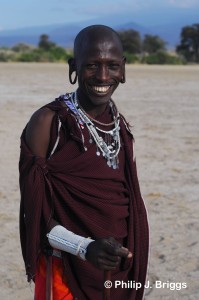 Sherai Saab, Ilkiponi warrior age-set, Oltepesi zone
Sherai is a Maasai warrior from the Oltepesi area, whose heart is the only thing bigger than
his smile! He is a sharp, clear thinker and the concept of conservation is obvious to him.  He believes the benefits and opportunities are much larger than simply killing lions, and he is eager to convey this message to his fellow warriors. He has never been to school, yet his eagerness to learn and to quickly comprehend new skills is second to none. He had to beat stiff competition in his zone while on trial to be selected as a Lion Guardian and it was his enthusiasm to work exceedingly hard and use his astuteness that made him shine out beyond his competitors. We anticipate big things from Sherai, and with training we hope to mold him into a leader of conservation in his area. 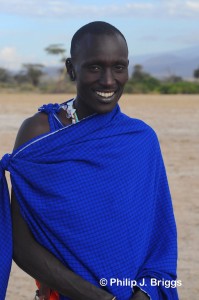 Meitiaki is a tall elegant lion killer. He previously killed two lions and was also seriously mauled during one of the fights. A natural leader in his age-set, he is the deputy (Engopiro) to the warrior chief for the whole of the Sinya area. You can see the focus and seriousness in his eyes which portray a natural lion killer, yet it is these very characteristics which will make him a force to reckon with while he oversees his zone as a conservationist. He lives in Endonyo Emali zone, which is the location of the highest conflict between lions and livestock in the whole of the region. With his powerful command and presence, he will confidently be able to influence his fellow warriors to withdraw from lion killing, even during extreme conflict situations. 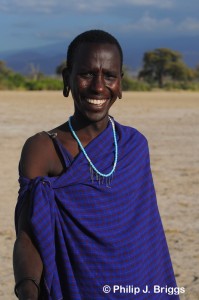 Sinjore surprised us from the beginning; he showed that being on trial for a Lion Guardians position doesn’t mean that you just try your best to find lion tracks, but that you can actively involve the community from the onset and develop protocols for livestock conflicts. His zone, Ildonyo, does not currently have active lion movement, so Sinjore started introducing himself to his community as the Lion Guardian in the zone even before he was offered the job, telling them to call upon him at any moment, day or night, for assistance with issues related to preventing conflict from occurring. This intuitive initiative secured him employment with the project. He is a tall warrior with a warm friendly disposition and hearty laugh, while his most appealing characteristic is his pure honesty. He has a long journey ahead of him with regards to reading and writing, but his eagerness to learn will see his rapid advancement. 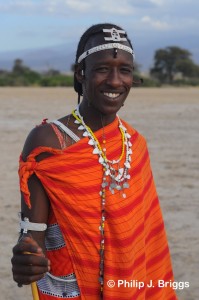 Kirisia is a bright young warrior of the Iltuati warrior age-set.  He has spent some years in Sinya Primary School so he already knows how to read and write, but he now has the opportunity to develop his skills in the arts of conservation and to be a leader among his own age-set, who are tomorrow’s lion killers. Being young, he is light on his feet and able to walk far distances without tiring. Although the youngest of the four Sinya Lio Guardians, he has a secure confidence in his ability and is assured in his decision making and, therefore, not left behind by the other older Guardians. 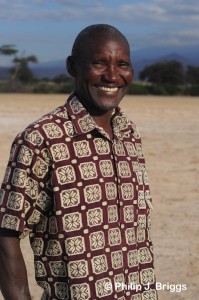 Yohana is an elder who comes from the Tinga Tinga region. He has worked extensively thought the area of Sinya as a community leader and is well respected by those with whom he has worked over the years. He is the ideal leader to oversee the Lion Guardians Sinya project and help establish it in the community while training the new Guardians on their daily duties. He will be responsible for overseeing the Lio Guardians in their respective zones and responding to any conflicts which may occur, providing additional aid to the Guardians on the ground. His knowledge of how to communicate with people coupled with his maturity will come into its own once conflict arises.

Kisimir Olomayiani, a senior Lion Guardian from the Amboseli Ecosystem, has been conducting intense training with the new recruits for the past seven weeks.  Specifically, this training has included basic reading and writing, filling out data forms for lion spoor and community work, as well as  the technical training on the use of their GPS and radio-telemetry units. Training has proceeded at an excellent rate, and the new Lion Guardians are already performing their duties to our highest expectations.  They are now able to work independently, fully executing their duties and responsibilities as Lion Guardians.

Based on their hard work, we have established that there is one active group of lions in the Sinya area, consisting of one adult male (named Shaka – who is collared by the Amboseli Lion Project), an adult female and two nine month old cubs (male and female).Their movement is typical for lions living in community areas: they are covering large ranges and traversing several zones on a regular basis.  Based solely on the number of reports of lion tracks, one would have the impression that there might be numerous lions in the area.  However, every time we have followed the actual tracks from start to finish, we have found that it is the same group of lions navigating far and wide. This family of lions is mainly using the Endoinyo Emali and Orkinyei sections of Sinya. We expect the rainy season, which has just started, will bring other lions from Amboseli into the vicinity.  We have also been able to verify the presence of leopards and cheetah, and bizarrely there seems to be one leopard that likes to follow Shaka around!

An interesting incident occurred during the initial stages of the trial period for the warriors. We responded to a report by candidate Meitiaki and, upon reaching the place where he had located a group of four lions, we saw that a herd of cattle were literally about to walk directly into the thicket where the lions were lying. We rushed to the place (in our vehicle) and turned the herd around just before they entered the thicket, with only a few meters to spare! This incident showed the candidates and the herders exactly how the Lion Guardian project could benefit their communities, by preventing conflicts in the bush before they happen. The story of how we rescued the herd of cattle from an imminent encounter blazed through the communities like wildfire and the concept of our preventative approach to conflict was instantly fully understood and welcomed by all.

Since the start of the expansion, there has been one lion-livestock conflict that occurred in September on the border of Kenya and Tanzania near Nadosoito. Shaka, killed three cows that had been lost by their herder the night before. The incident passed without further ado as the owner chose not to retaliate.

We would like to thank all of our collaborators for their support during this period and for making the expansion into Sinya a reality.   The African Wildlife Foundation has been instrumental providing essential logistical assistance and support, helping to organize many of our meetings with the local communities and help us navigate our way to receiving permission to operate in the area.  Big Life Foundation/Honeyguides and Shu’mata camp are providing additional logistics.  We would also like to thank the Kenya Wildlife Trust, Maliasili Initiatives and the Rufford Small Grants Program who have provided funding for the expansion.