Early in 2021, a young lioness named Nempusel entered our operating area from Amboseli Park. She was a first-time mom, and she gave birth to her cubs right next to several bomas. We’ve seen other new moms have their cubs in similar areas; these new mums don’t seem to realize having little cubs so close to people can be very dangerous. 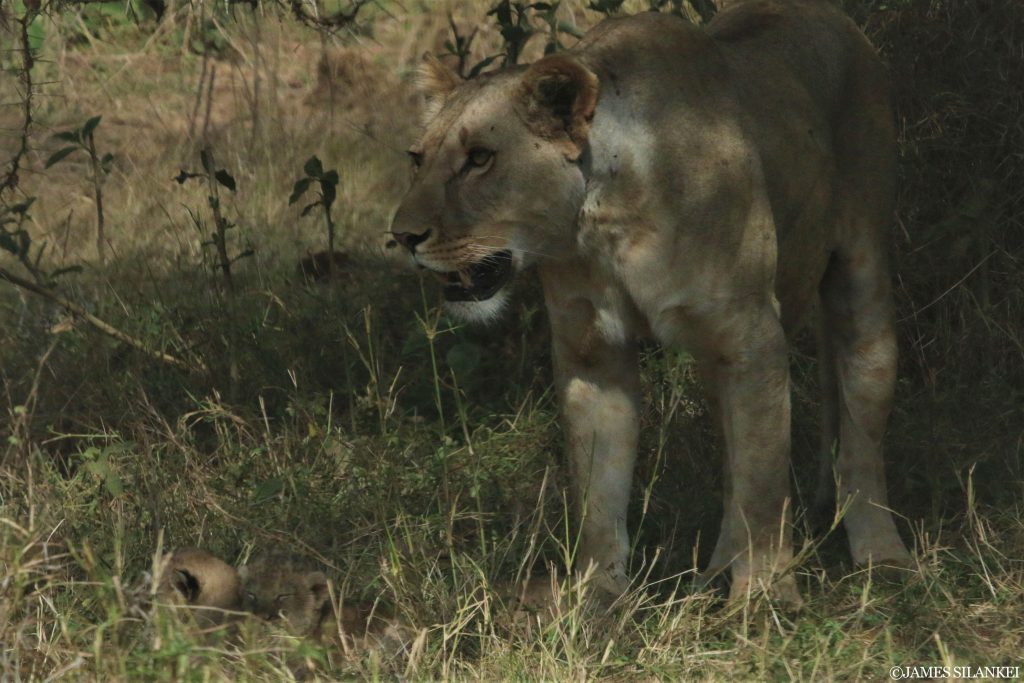 One day, a young herder was herding livestock near where Nempusel’s family was hiding, and he unfortunately came too close to her cubs. Trying to protect her tiny babies, she charged and attacked him.

Understandably, the community was very upset – after all, a young boy ended up in the hospital. Among the Maasai, a lion attacking livestock is one thing, but a lion injuring a human being – let alone a child – is completely different. Traditionally, any lion that attacks a person is almost always hunted and speared, with fairly little discussion. So that was what we prepared for…but it wasn’t what happened.

We arrived at the community in the wee hours of the morning after the attack to spend time talking to the boy’s family and the community. We comforted them and offered our support. And what we discovered was that the community wasn’t planning to kill Nempusel; in a remarkable display of tolerance, they were willing to spare the life of a lioness that had injured a young boy. However, in exchange, they demanded she be taken away so that she couldn’t cause any more harm.

The Lion Guardians team generally does not support translocations, because animals moved out of their home range often don’t do well and can end up dead after a traumatic experience. But in this case, there were no other options; arguing against the translocation would have been a death sentence for Nempusel and her cubs. So our team helped the vet from Kenya Wildlife Service find the family of lions, and the vet darted Nempusel and translocated her with her cubs. We requested that two representatives from the community come along to see the translocation and confirm that we were keeping our word and moving Nempusel out of the area. The representatives came back after the translocation and shared with the community. After the operation our team breathed a sigh of relief, then waited to see whether the young family would do OK.

And the very next day, someone sent us a photograph of a female carrying a tiny cub. We immediately checked our records, and it was Nempusel. We learned that she had picked up her tiny cubs one by one and carried them more than twenty kilometers, straight back here to where she had been translocated from. 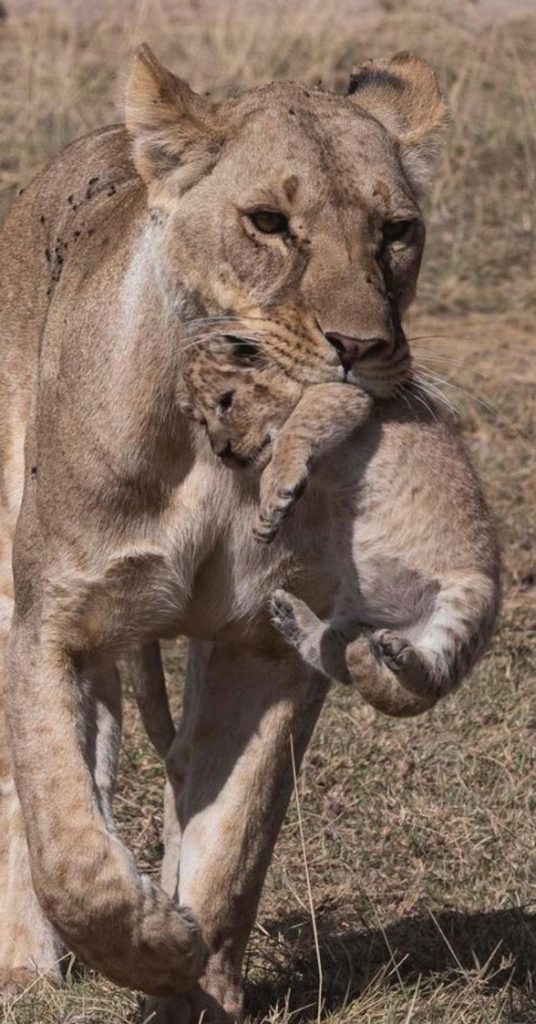 Again, the community was upset; they had the same lion back in the same area, just days later. And the options were even more dire now – either she could be translocated somewhere much farther away (like an orphanage) which was even more likely to end badly, or the community could kill her.

So our team provided a third option: constant supervision. Every morning since Nempusel came back three months ago, the Guardians have been waiting for her; they see where the fresh tracks are, and spend their whole day in her area, keeping livestock and herders away. Eventually, she moved even closer to the bomas, so we set up a temporary campsite next to her and started doing night patrols to prevent conflict.

At one point, she slipped away and killed a cow, and again, we thought we would lose her. Yet incredibly, the community did not initiate a hunt; instead, they trusted us to continue to protect both them and Nempusel’s family. In fact, the communities have grown surprisingly fond of Nempusel – one community member recently said “Nempusel is actually a well-behaved lion, and only scratched the boy because he got too close to her cubs. We don’t mind her and her cubs being here.” That tolerance – which would have been impossible a decade ago – is a testament to dedicated, innovative conservation work on the ground. By helping communities, we are helping lions survive and thrive.

We are happy to report that Nempusel has now moved with her cubs back into Amboseli National Park, where she is farther from people, livestock, and bomas.

Nempusel’s story isn’t over. If you’d like to support our work so that we can help more communities and more lions like Nempusel, please donate at http://lionguardians.org/donate/.