The mystery of the two lions who appeared in our coverage areas in 2013 continues to intrigue Guardian Kamunu. “Do you know where Loosinkiron and Lorngojiyne came from? Have you figured it out yet?” he asks when we accompany him on reports. 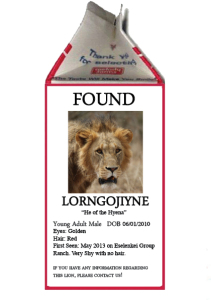 We are baffled too. For almost two years now, we have wondered where these two male lions came from. Loosinkiron and Lorgojiyne arrived in Eselenkei in early 2013 and since then have managed to oust the resident male lion, Ndelie, and mated with all the females of Eselenkei Group Ranch (Selenkay, Nenkii, Meoshi, Noldupai, and now Nanu).

We now have names for these two males and after monitoring them for some time, we know their personalities, preferences, the females they have mated with and the many cubs they have already produced; yet we still have no idea where these two males came from, exactly how old they are, or who they are related to. We have so many unanswered questions.

Loosinkiron and Lorgojiyne were not born or raised in any of the Lion Guardians’ areas of the Amboseli ecosystem nor do they seem to have originated from Amboseli National Park. Their shyness and skittishness confirms that they are probably not from a protected area where they would have been accustomed to seeing and hearing vehicles. The direction fro 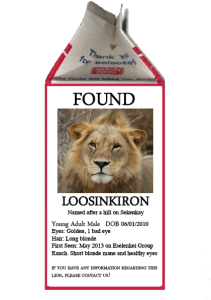 m which their tracks were first seen by our Lion Guardians, indicate that they could have come from Laing’arrunyoni hills in the Matapato section, an area currently outside our jurisdiction. However, we cannot be certain of this.

Today we know that lions, especially male lions, can move large distances between populations as they move from their natal home ranges. But we are not sure which populations are healthy enough to send out dispersing males, how often this happens, or where they reach. This activity of dispersing is one of the most important ecological processes, although it remains one of the least understood. As human populations continue to rise and put more pressure on lion rangelands, isolating lion populations, it is increasingly important to understand their dispersal characteristics and how we as conservationists can effectively play a role to maintain connectivity and thus a larger viable metapopulation.

Through our many collaborative relationships, Lion Guardians is attempting to engage in broad scale lion conversation. Our involvement in the Borderlands Conservation Initiative, our expansions in Tarangire and Ngorongoro Conservation Area, and our latest campaign to help us make the LINC are all geared to this end.

If, like us, you’re interested in the stories of Loosinkiron and Lorgojiyne, and others like them, please continue to support us so that together we will continue to conserve lions and preserve cultures. Please help us make the LINC – donate today and your contribution will be doubled.